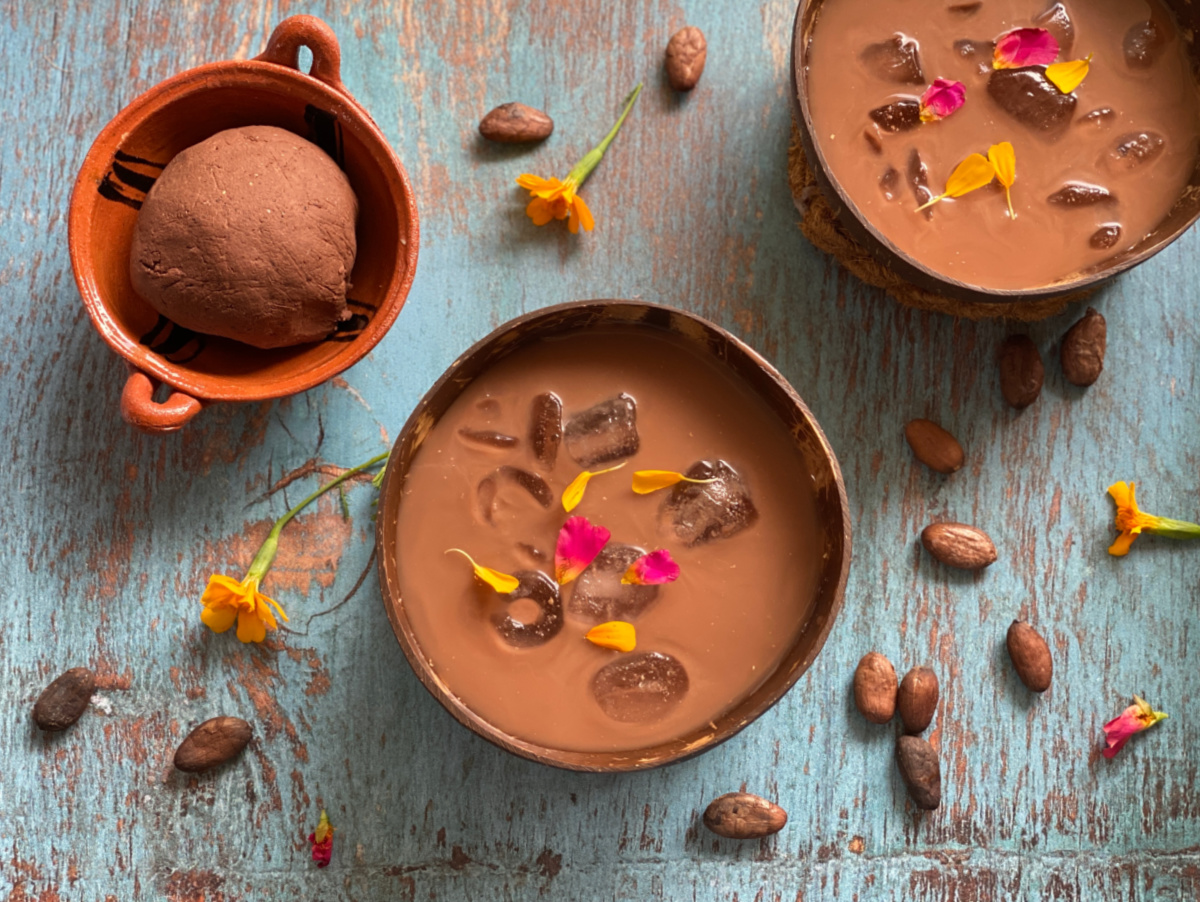 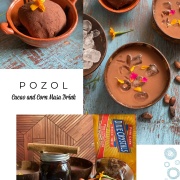 Unlike champurrado, this is a cold drink with maize and raw powdered cacao from real cacao beans. The beverage has hints of vanilla and cinnamon and the sweetness of Dixie Crystals Light Brown Sugar!

How the tradition of maize and cacao mixed in a drink started?

During the summertime, Mexicans from the South drink pozol, also called “pochotl.” An iced chocolatey masa harina drink that dates from Mexico’s Pre-Columbian times. In Nahuatl, this Mexican beverage is called “Pozōlli.” Typically drank as a thirst quencher, to tame the hunger, and as a pick me up.

Pre-Columbian men carried the cacao masa in a jute bag wrapped in plantain green leaves and ready to mix with fresh water from a river. Stirring with the hand until the masa harina dissolves. Then drank directly from a “jicarita,” a gourd bowl.

Sugar cane wasn’t part of the pantry until after the colonization. In those times, sugar didn’t exist. Thus pozol didn’t have any sweetener, yet paired with sweet coconut or papaya as the taste is bitter like dark chocolate.

The abundance of cacao beans and the Mexican South.

The Mexican South includes several states being Tabasco and Chiapas, where most of the abundance of cacao plants exists. And where the tradition of drinking pozol until these days exists as it is a popular drink.

In Tabasco, you can find other varieties such as pozol with sweet potato, white pozol (maize), and agrio (fermented) from home cooks and street vendors.

And in Chiapas, inspired by the same ingredients for the cacao and corn masa drink, they make “tescalate.” Another popular Mayan drink with cacao, masa harina, cacao beans, piloncillo, achiote, pine nuts, cinnamon, and vanilla.

Guerrero is another Mexican state that embraces the use of cacao in cold drinks. However, instead of maize, they use rice, and the iced beverage is called “chilate.”

Mayas traded with cacao beans in the old days, and only the high ranks could drink the chocolatey spicy drink. As time passed, the cacao and corn masa drink became a staple, and working men used it as a snack while working in the fields.

Maize was used for corn tortillas and for crafting tamales, making pozole (a soup with meat and corn), small bites such as tlacoyos. And for making drinks like champurrado, xocolatl, atole de chocolate, cacao, and corn masa for cold drinks.

You can learn more about the Mexican regions in my latest cookbook, “The Best of Mexican Cooking,” where I provide in-depth information about the different food regions and the convergence of European and prehispanic cuisines. And the importance of maize in Mexican culture.

Tips on how to make the best cacao and corn masa cold drink called pozol.

Making pozol or the cacao and corn masa drink the classic way is laborious as you have to cook the raw corn and nixtamalized, clean, and pass through the grinder to make fresh masa. Then the cacao beans are crushed on a metate (a stone grinder) by hand to create a cacao paste.

But I have found the best way to make this refreshingcacao and corn masa cold drink easy at home using ingredients found at the supermarket. The taste is the same as the classic pozol, but we have used a homemade brown sugar cinnamon syrup with hints of vanilla as a sweetener.

Choose the masa harina of your choice. Find that type of corn flour at the Latin grocery store. It could be nixtamalized corn masa or classic (not cornmeal). I used blue corn for achieving deeper dark color on the masa mixture.

Use raw cacao powder. I used cacao beans I processed myself but to save on time, the powdered cacao serves well. I like the organic raw cacao as it has a deep, strong flavor.

In a deep bowl, combine the masa harina with the powdered cacao. Then add warm water in stages and create a masa ball. Do not add anything else. Adding sugar or spices spoils the masa.

Keep the cacao masa covered or wrapped in plastic. This cacao masa could stay fresh for several days inside the fridge, wrapped and stored inside a sealed bag or in a container with a lid.

Prepare a homemade brown sugar cinnamon syrup with hints of vanilla and use it as a sweetener.

To make the pozol, break some cacao masa with your hands and dilute it with fresh water. Keep stirring until the masa dissolves and creates a chocolatey consistency.

You will love this Mexican chocolate drink! Sweeten the drink with the cinnamon vanilla syrup and serve with ice. Garnish with edible flowers.

The remaining cacao masa could be used as a base for a hot Mexican champurrado recipe, a thick chocolate drink similar to a chocolate version of atole.

After dissolving and sweetening the cacao masa mix, add the preparation to a medium saucepan and cook on the stovetop at medium heat for 5-7 minutes until the mix thickens. Use a molinillo or wooden spoon and keep stirring until getting the desired thickness.

Serve the hot champurrado in a clay jarrito and enjoy with Mexican pastries or churros. This is a great authentic Mexican recipe for making a warm hot chocolate drink with corn masa base for Dia de Los Muertos or on a cold winter night.

Learn how to ferment, dry, and roast cacao beans for pozol!

Have you ever tried making your own cocoa powder? We wanted to experiment with raw cacao pods. We were successful; however, processing cacao for chocolate or making the cacao and corn masa drink is a labor of love and patience. ⁣

With the freshly roasted cacao beans, I made the cacao and corn masa pozol, a traditional drink from my ancestors.

Working with natural ingredients and processing the ancient way is so eye-opening. If you have never tried to make your own chocolate or cacao powder, you’ll find the process so rewarding and fun. Plus, it is educational, and you get to appreciate even more those gifts from nature.

Using high-quality ingredients such as Dixie Crystals turns this drink into a superb tasty experience. When at the local grocery store, grab your Dixie Crystals products and get ready for the holiday season and Las Posadas. 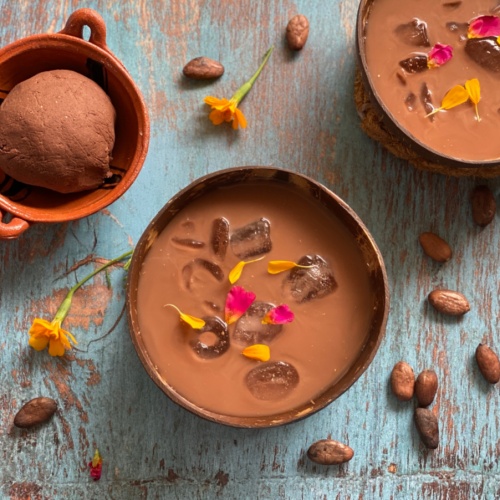 Chef Adriana Martin
Super easy cacao and corn masa drink recipe. Unlike champurrado, this is an iced cold drink made with maize and raw powdered cacao. The taste is the same as the classic pozol, but we have used a homemade brown sugar cinnamon syrup with hints of vanilla as a sweetener. It is one of the best Mexican drinks that you must try at least once. And a classic recipe from the Mexican south.
5 from 17 votes
Print Recipe Pin Recipe
Prep Time 5 mins
Cook Time 15 mins
Course Drinks
Cuisine Mexican Cuisine
Servings 6 servings
Calories 352 kcal

For the cacao masa

For the cinnamon vanilla syrup

Find more details about the pozol and its preparation at DixieCrystals.com Use this same recipe for making a delicious Mexican drink called champurrado!

This looks so good! Thanks for including a little of the background of this drink! I know I’m gonna love these flavors together!

This looks so delicious! I love the flavors of cinnamon, vanilla, and cacao together so I know I’m going to love this drink. Saving to try later!

Your photos are amazing! Loved learning about the background of this recipe.

Clearly I need to branch out more on my drinks! I’ve never had this before!

Wow, I went out to get blue corn masa after seeing this recipe. The homemade cinnamon vanilla syrup was absolutely delicious. I’m going to use the syrup in my coffee in the morning now.