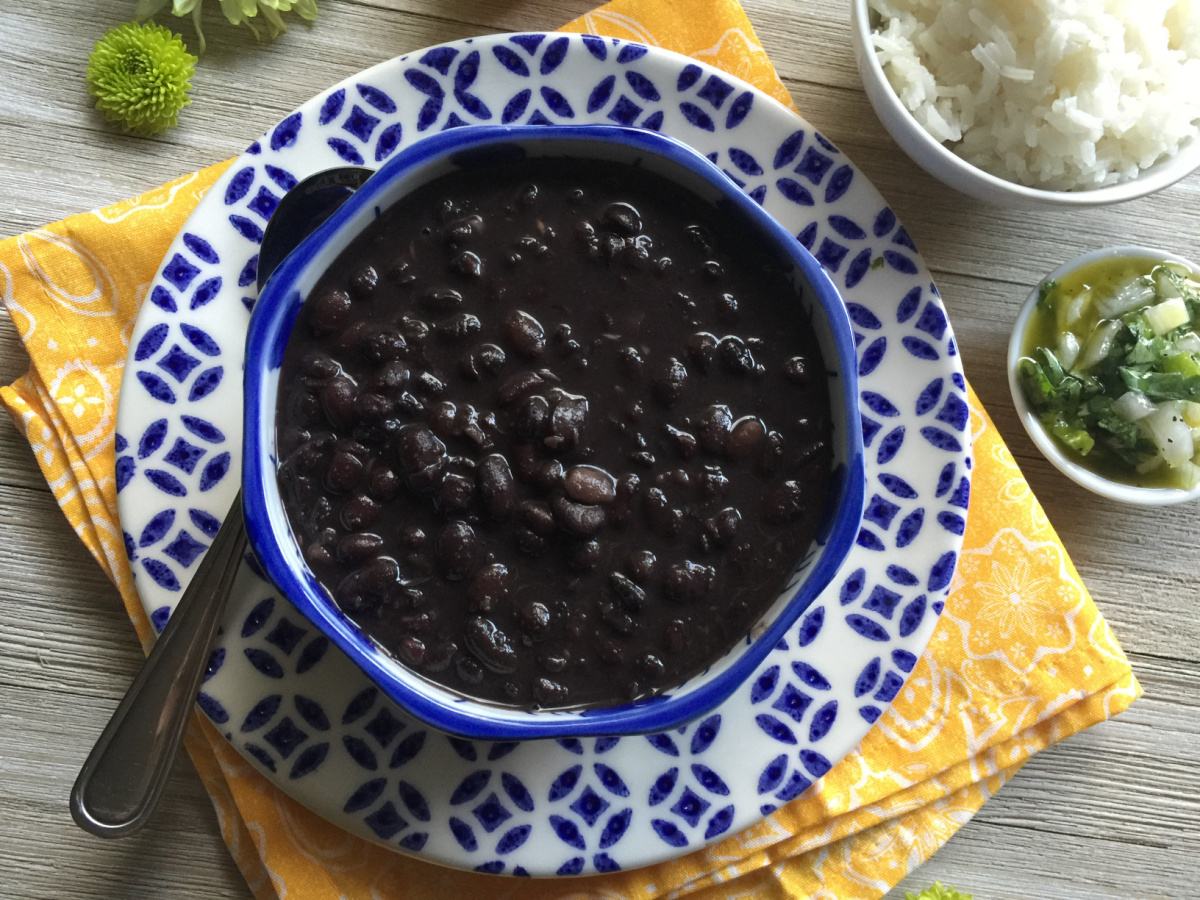 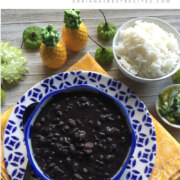 Black beans are botanically known as Phaseolus vulgaris and are part of the legumes family. Some called this kind of dried black beans turtle beans, caviar criollo, or frijoles negros in Spanish.

The black beans are native to America and originated in Mesoamerica and in Andean America. Beans were domesticated approximately 8,000 years ago and enjoyed since ancient times. In Mexico, Guatemala, El Salvador, Panama, Nicaragua, Costa Rica, and Cuba, the dried black beans are frijoles negros. And in Peru and Ecuador are fréjoles.

Some believe dried black beans were brought to Cuba by the Spaniards, who introduced the “Moros con Cristianos” (black beans with rice). A representation of Spain’s occupation by the Moors. Black beans represent the “Moros” (Moors), and the white rice is the Christians, in this case, the Spaniards battling the occupation. In Cuba, the dish of Black Beans and Rice transformed and have become a Cuban cuisine staple.

The Cuban Black Beans recipe was my father-in-law’s specialty.

Ernesto mi suegro, enjoyed cooking them when we visited. He always had for us Cuban black beans, white rice, and fried plantains, among other yummy things. Like his famous chunky sauce made with olive oil, chopped onions, cilantro, green pepper, lemon juice, and spices. Perfect for grilled beef and chicken and garnishing black beans and white rice.

A small homage to my father-in-law making his recipe for Cuban Black Beans.

My father-in-law passed away a few months ago, and we still miss him. I think we will never recover from his passing. He was a great man, jovial, with great humor, amazing father, and husband. For him, his family was the center of everything he loved.

When my husband took me to meet him for the first time, it was an unforgettable visit. He already had a homecooked meal, including his famous Cuban black beans recipe made with dried black beans and the staple green pepper or aji cachucha. My father-in-law was a lover of my Mexican culture.

He knew all the regional songs of the Mexican isthmus. Loved the marimba and the Mexican huapango. His name is Ernesto, but they called him Ernie. I named him “El Guapo” because he was handsome and with a lot of personality.

El Guapo was born in Cuba, in a town called San Antonio de Cabeza in the district of Matanzas. In Cuba, he was a prisoner after Fidel took over. Many men in La Habana we incarcerated for no reason, a tactic to infuse fear, and very common in those days. Within a few months managed to leave the island with his wife and son (my husband, who was only 5 years old).

From Cuba, they emigrated to New York, where a close relative, who was a merchant marine, sponsored them. Arriving in New York was a total shock. He and his family did not speak English. They arrived only with a small suitcase and twenty dollars to start a new life inn a cold city of concrete, without work and facing so many challenges.

Despite all the obstacles, El Guapo achieved success in the big apple. A few years later, he brought his family to Orlando and joined the Walt Disney World opening crew until he retired after more than thirty years of service.

A life of struggle but full of joy. He is an immigrant who achieved the American dream and left a great legacy of love and hard work to his family. Including his famous recipe for Cuban black beans that we keep as a treasure.

Cuban Black Beans with green peppers is a recipe that was my father-in-law’s specialty.

Today, I make a small homage to El Guapo’s recipe for Cuban black beans. A simple dish, but that means so much to me. Even though I met him late in my life, Ernesto always supported me as if I was his daughter. And his dream was that one day he would see me on TV cooking with the pros.

I could not give him that joy, but I know he was proud of me and my achievements. For his birthday, he would always ask me to make him my favorite chocolate cake as it was his favorite too.

Since I enjoyed so much his dish of Cuban black beans, one day, I asked him to teach me how to prepare his famous dish and shared his secret. He had a plant of cachucha peppers in his backyard. These green peppers are also known as ají dulce or ajicito or cachucha pepper.

The flavor profile is similar to green peppers, but it has a stronger flavor when cooked. This pepper is not spicy but, when added to the black beans, infuses a pleasant taste, very characteristic of this classic dried beans recipe also called frijoles negros.

Now that the secret is out, I have planted some seeds of this ají cachucha in my garden so that I can have it handy and explore other applications aside from the Cuban black beans recipe.

I hope this recipe inspires you to cook my father-in-law’s Cuban black beans at home. And share with us how you liked them and a story of someone special in your life that has inspired you or touched your soul in a special way. 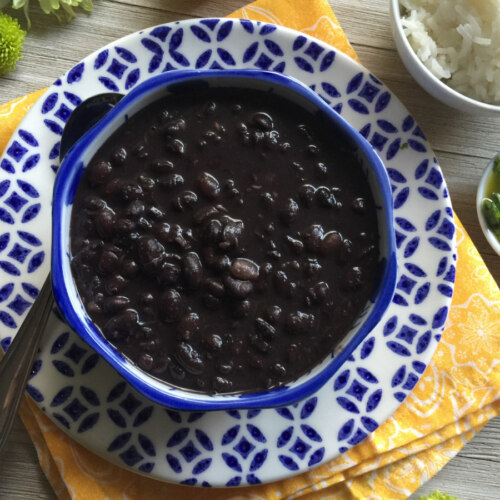 The Cuban black beans you can portion in appropriate plastic containers and keep in the freezer. That way you can enjoy them for several weeks.

This is soo amazing, loved Cuban black beans. Recipe is so easy to follow too.

I forget about using my pressure cooker to cook beans. A much faster and simpler way than on the stove. Thanks for the share!

Omg I can’t wait to try this! I literally love black beans. They are my favorite!

I love black beans and I also love Cuban food. I am sorry for your loss. He left you with a great recipe.

I love black beans! What isn’t to love about high fiber, protein, and energy all in one food!