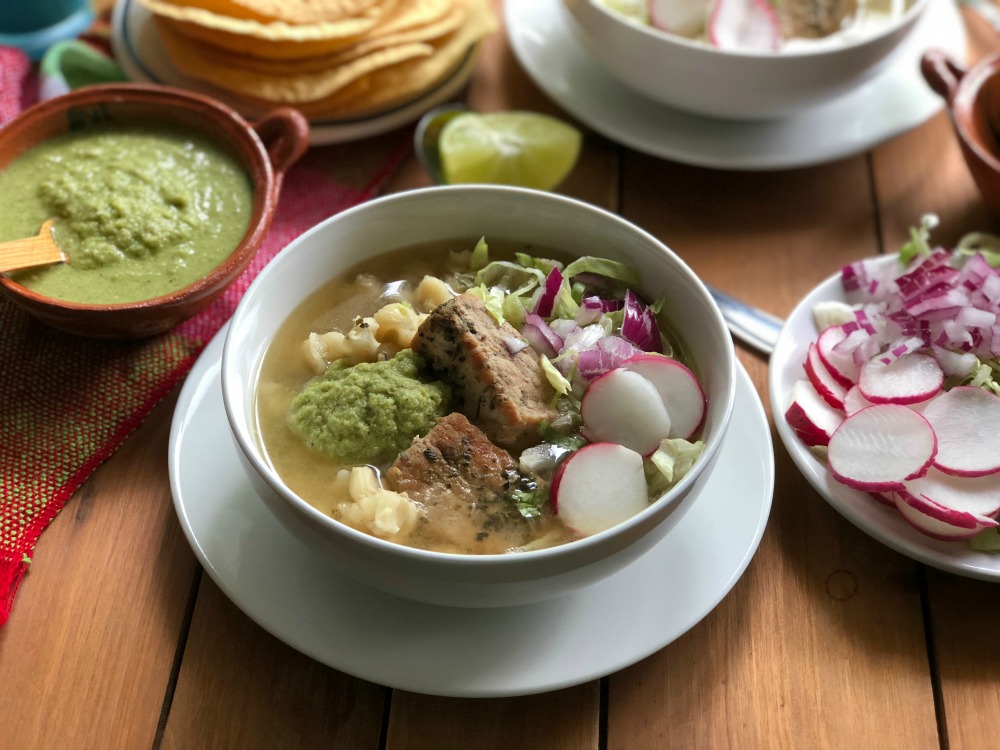 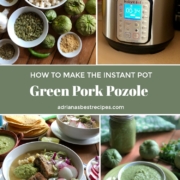 The holidays are not complete if the menu doesn’t include an Instant Pot Green Pork Pozole!

Pozole is a Mexican Cuisine staple that never fails in parties. It typically has pork, hominy corn, and spices. Today we are bringing an updated version of this classic dish: an Instant Pot Green Pork Pozole feast. This recipe is brought to you thanks to the National Pork Board’s @PorkEsSabor with whom I teamed up with to create delicious and nutritional pork recipes going through Hispanic Heritage Month which ends mid-October.

The name pozole comes from the Nahuatl word “pozolli,” which means frothy. Name given due to the foam the white corn makes when boiled. Pozole was considered a sacred dish by the Aztecs, who used to make it for religious ceremonies. After the conquest of the Spaniards, the pozole transformed into a soup dish served during weddings, festivals and special celebrations. Pozole is one of the most ancient and traditional dishes Mexico has. That is why for us Mexicans, a party isn’t a real Mexican party if pozole is not served after midnight.

There are many versions of pozole. Each region in Mexico has its spin and flavor profiles. You can find it in white, red and green. Mainly, the difference is the sauce and spices used to create each of the versions, but the commonality is that most pozole recipes use pork as the main protein.

Inspired by the Green Pork Pozole, I’ve created an updated version by cooking the Green Pork Pozole in the Instant Pot. I used a pork loin (cut into chunks), canned pre-cooked hominy, bay leaves, oregano, cumin, chicken broth, and chicken bouillon. The green sauce has toasted pumpkin pepitas, garlic, grilled tomatillos, serrano peppers, and cilantro. The use of the pepitas results into a luscious thick sauce that pairs perfectly with all the flavors of the Instant Pot Green Pork Pozole. Using the Instant Pot cooking technique instead of a standard pressure cooker allows for fast cooking, making it easy to enjoy a classic traditional pork pozole in less than forty-five minutes.

Pork is a delicious, high-quality protein that allows using many different cooking techniques including pressure cooking. When using an instant pressure cooker, the meat will tenderize and melt in your mouth. Besides, a new National Pork Board study revealed that sales and consumption of pork would continue to increase. It also indicated that pork loin is one of the preferred pork cuts in Hispanic and African American households. We can understand this because pork is tasty, and an excellent option to serve as part of our weekly menu and when entertaining at home, including the enjoyment of the Instant Pot Green Pork Pozole during the holiday season.

Make the Instant Pot Green Pork Pozole for your next family gathering!

And remember, there are many ways you can enjoy pork’s delicious flavor and its nutritional benefits. Pork is easy-to-prepare, convenient to cook, grill, oven roast, slow and pressure cook without adding extra calories. 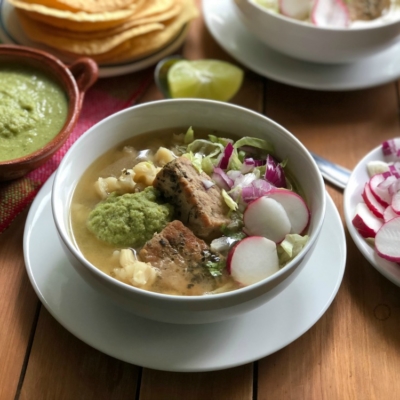 This looks amazing! I haven’t pulled out my instant pot in a while but I think this is the perfect occasion to use it!

pozole is one of my favorite Mexican dishes – I went to school at the University of New Mexico and there I gained many Mexican friends who introduced me to this delicious soup – I’m thinking it’s time to make some pozole soon again!

I love the way this pork is presented, it looks very comforting and perfect for the fall weather that’s kicking in!

This is very interesting to me for a few reasons. We use hominy corn in Jamaica but in a completely different way. This is a savory presentation, which stands out for me! You piqued my interest with the historical elements of the dish Adriana. Why is the dish served particularly after midnight at Mexican festivities ? I am a huge fan of pork. I love fattier cuts. Never had pork in a soup though! You have given me ideas Adriana!

Delicious recipe!!! I cannot get enough of instant pot dishes. This recipe is filled with bold delicious flavor. I can’t wait to share this recipe with my sister-in-law.