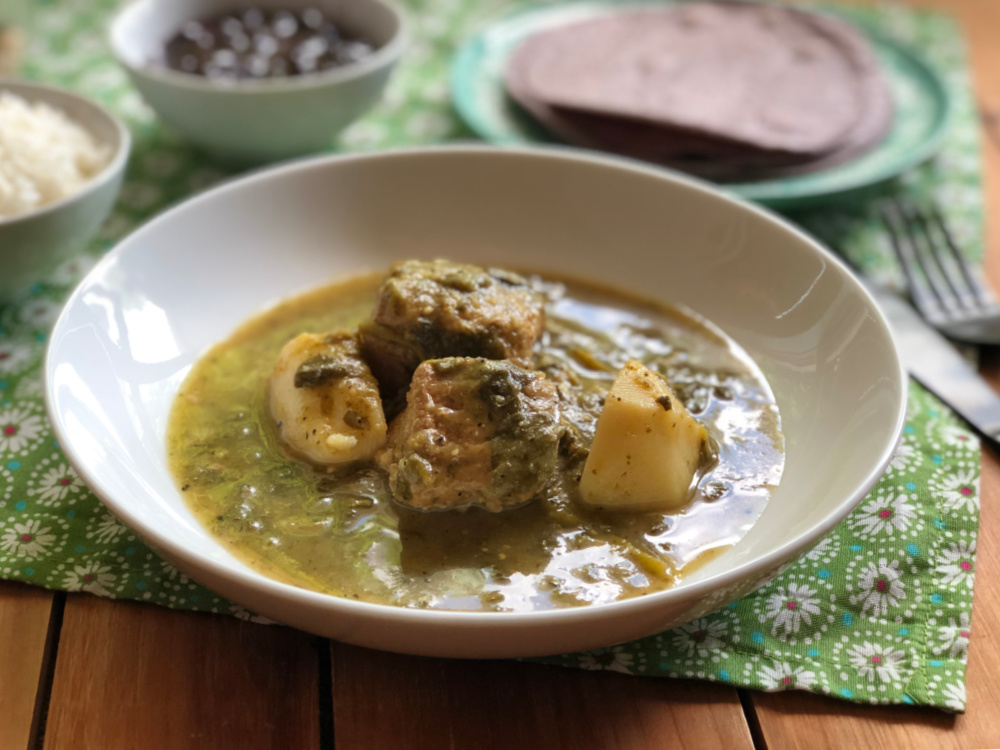 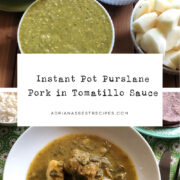 Are you a succulent lover? Then you will enjoy using purslane in your cooking as it is an edible succulent and a perennial that grows freely. Many farmers use purslane as animal feed. In Mexico, we use it to cook purslane pork and add it to salads as it can be eaten raw.

Raw purslane tastes lemony and somewhat salty. When cooked tastes like spinach. If you are an avid forager, look for the edible type as purslane is also confused with spurge, which is toxic and not for human or animal consumption. Edible purslane is also known as pigweed and little hogweed. Like spinach and kale, purslane is a good source of iron, potassium, and other minerals.

Pressure cooking is the preferred technique to cook purslane pork!

And the Instant Pot makes it easy to cook pork meat. The instant pressure cooking is so versatile. It allows cooking desserts, soups, yogurt, beans, and so much more.

The use of the instant pot makes the pork meat so tender that it melts in your mouth. Plus the flavor of the green tomatillo sauce intensifies with the perfect balance of spicy and smoky notes.

For the purslane pork, always opt for your favorite pork cut. My family prefers lean pork. Thus we used pork loin. But this dish turns out perfect with pork chops, fatty cuts, and pork shoulder too.

The purslane pork is best when pre-seasoning the meat. After cutting in cubes, we add some olive oil, garlic powder, sea salt, and black pepper. Then we sear in a stovetop grill and set aside. The searing in a separate skillet is optional, as the Instant Pot has a sautéing mode that works well too.

I like to save time in the kitchen. And since I use a lot of salsa verde many times I make big batches of tomatillo sauce and freeze for later use. For this sauce, we use fresh tomatillos, and green chile de arbol (it is less spicy than the red dried pods).

All the ingredients for the tomatillo sauce we prefer to roast first, and then I do a quick boil with some water. This process adds more flavor. If not finding fresh tomatillos replace with canned tomatillos.

Expert tip ~ Avoid tomatillo bitterness, making sure not to overcook the tomatillos. Typically those cook in less than 10 minutes at medium heat, and the tomatillos shouldn’t burst.

We recommend using classic condiments for the purslane pork stew, such as chicken bouillon, cumin, oregano, black pepper, and use homemade broth for best results.

Cleaning the purslane with running water is a must. Purslane grows on sandy places and can have debris. This ingredient is essential for the pork stew. However, it is difficult to come by, so a good replacement for the purslane is spinach. It has a similar taste, and it is green too.

The serving suggestion includes a side of Mexican white rice, black beans, and blue corn tortillas. Are you ready for an authentic purslane pork dish experience?

For the Purslane Pork Stew

For the Green Tomatillo Sauce

Have you tried the purslane pork stew recipe? Snap a photo and tag us on Instagram and or Facebook using the handle @adrianasbestrecipes and this hashtag  #ABRecipes Happy Eats!

Ok…I’m coming over for dinner 🙂 Just kidding. Great recipe and interesting herb – purslane. Never heard of it and can’t wait to cook with it. Amazing photos.

I will have to look for purslane. It may actually be growing it in my yard. That would be cool so that I can try this purslane pork at home.

I’ve never heard of purslane before. It looks so good too. I will definitely need to try this pork stew. I can’t wait to see how it tastes.

You are a very good cook, this recipe makes me want to stop and prepare it and I am not even hungry.