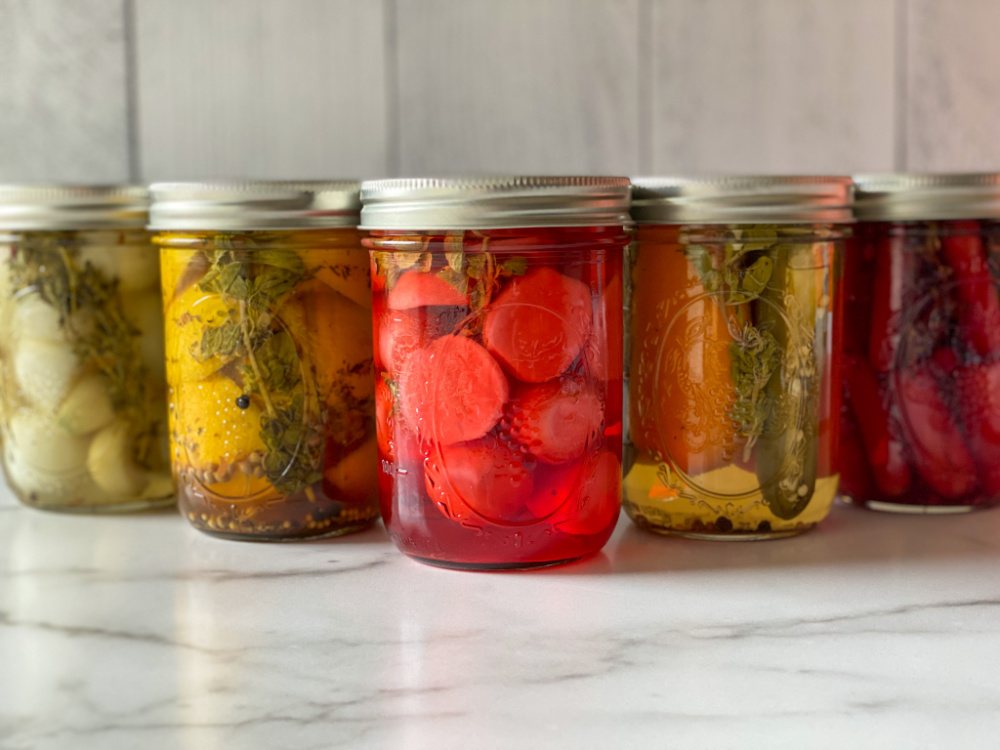 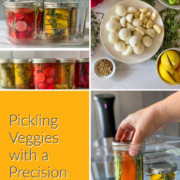 This post about pickling veggies with the sous vide technique was sponsored by Anova as part of an Influencer Activation for Influence Central, and all opinions expressed in my post are my own.

Precision cooking, also called sous vide, is a wonderful technique that was reserved only for chefs. Thanks to Anova now, home cooks can prepare restaurant-quality meals at home with no fuss.

Pickling veggies and peppers are one of my favorite recipes for using the Anova Precision Cooker. It is a simple method that never fails, and the results are fantastic.

Certain vegetables, such as radishes, overcook and get mushy when using the classic pickling method on the stove. But with precision cooking is a totally different thing.

If you have not done pickled veggies on the sous vide, now is the time to start. And believe me, after the first batch, you will get hooked on making your own pickled veggies and peppers at home.

Gift yourself or a loved one an Anova Precision Cooker this holiday season!

For all the home chefs having an immersion circulator such as the Anova Precision Cooker is a must. Learn more about this fabulous cooking tool HERE and buy one today.

Prepare a savory brine suitable for pickling veggies. Typically is a mix between one part of water with one part of vinegar, sugar, and pickling salt.

If choosing apple cider vinegar, the brine will look a bit cloudy—the reason why we like white vinegar best.

Fresh herbs make the jars look nice and help with adding aroma and flavor to the pickled veggies. We like using fresh oregano, thyme, rosemary, and sage.

The pickled veggies recipe calls for 1 pint / 16 ounces mason jars with new caps and lids. Wash jars and lids thoroughly with water and soap and sterilize before using. Do not use jars bigger than 32 ounces.

Fill the jars with the dry spices first, then the veggies, and the herbs. Then pour the savory brine.

The veggies should reach no higher than 2 cm below the lid. And the liquid level should be 1 cm from the top of the jar.

Place the lids on the jars. Twist until they are “fingertip tight.” When cooking the pickled veggies, those will expand; thus, it is important not to overfill and not close the jars too tightly to avoid cracking.

For crispy pickled veggies, fill the pot with water, set the Anova Precision Cooker at 140 °F / 60 °C, and cook for two hours.

After two hours, take the jars out of the immersion circulator and let them rest until the lid pops, indicating proper sealing. If not properly sealed, the pickled veggies must be refrigerated.

Pickling veggies isn’t the only thing you can cook in a jar using the Anova Precision Cooker. Custards, eggnog, infusing oils, yogurt, pâté, and much more is possible using sous vide and jars.

Why we love the Anova Precision Cooker?

When life gets difficult, and there’s no time to cook and pickling veggies, the Anova Precision Cooker makes it easy to cook for the family and prep for the following day.

How this is possible?

When cooking with the Anova Precision Cooker, the meats, eggs, and vegetables can stay in the sous vide water bath until I am ready to serve the meal.

Using the sous vide technique, there is no way to overcook the food. The Anova Precision Cooker preserves the food at a consistent temperature avoiding overcooking or drying the meats. And not to mention makes delicious pickled veggies too!

I can cook eggs using the immersion circulator and keep them at a certain temperature for several hours. Then serve them to the perfect consistency. No more guessing when making poached or boiled eggs!

The Anova Precision Cooker has an app!

The app is a perfect addition to the cooking experience. It provides quick cooking guides, recipes, and customer support. Plus, the Anova Precision Cooker connects to WiFi.

The Anova app allows me to create my own recipes and share my meaningful experience with other sous vide fans and the Anova community.

When you acquire your Anova Precision Cooker, download the app, and sign up, I will love to connect with you there too!

How to set up the Anova Precision Cooker?

Now that you have the scoop on how to pickle veggies using the precision cooking technique, are you ready to start?

Below is the recipe card with all the details and a list of ingredients. If you have any questions about the sous vide technique and pickling veggies, leave a comment here, or connect with me on Facebook and/or Instagram @adrianasbestrecipes. 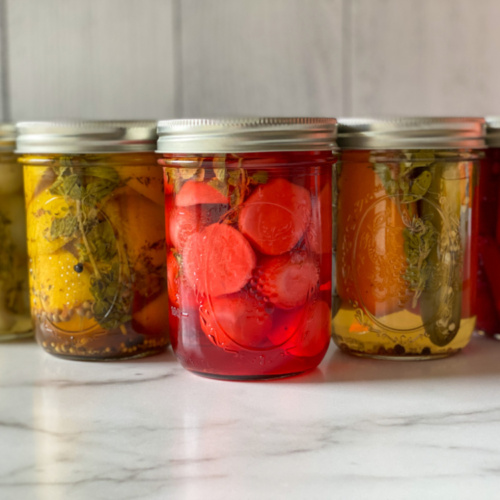 Pickling Veggies with a Precision Cooker

For the Savory Brine

For the Spicy Pickled Peppers

For the Pickled Mini Carrots

For the Pickled Radishes

For the Boiler Onions with Garlic

The pickled veggies recipe calls for 1 pint / 16 ounces mason jars with new caps and lids. Wash jars and lids thoroughly with water and soap and sterilize before using. Do not use jars bigger than 32 ounces. Avoid overcrowding to allow the jars to reach the proper temperature for complete pasteurization. The distilled five percent white vinegar mixed with sugar and salt makes the brine highly acidic so no food pathogens can grow. Therefore it is safe to store these pickled veggies in your cupboard. But if the canning jars do not seal, those must be kept in the refrigerator.

What??? I can pickle vegetables with my Precision Cooker? Well, actually, it’s my partner’s. I bought it “for him” for Christmas….. hahahah and look who is using it more than he is. These look stunning and they would make such lovely gifts! We have been having sous vide sides that have been cooked to absolute perfection. I guess the basic idea is the same for the pickles. Yum!

This actually looks like fun and there are endless ingredients to pickle. Another tool to look into.

What a great idea! And the pickled veggies would also be a great idea as a small gift! I love all the tips for successful canning.

That looks like such an awesome cooking method! I guess it’s similar in principal to a Bain Marie?

Sous vide could be a Bain Marie but with a controlled temperature making it very effective for achieving perfect results. A chef gadget that is now available for home cooks.

Wow would have never guessed that you could pickle veges with a precision pressure cooker. Your tips are so good!

Thanks so much! Indeed precision cooking is a good method for pickling. Be mindful of the measurements needed for vinegar and salt ratios, as those are key if looking for preservation in the cupboard and not in the fridge.