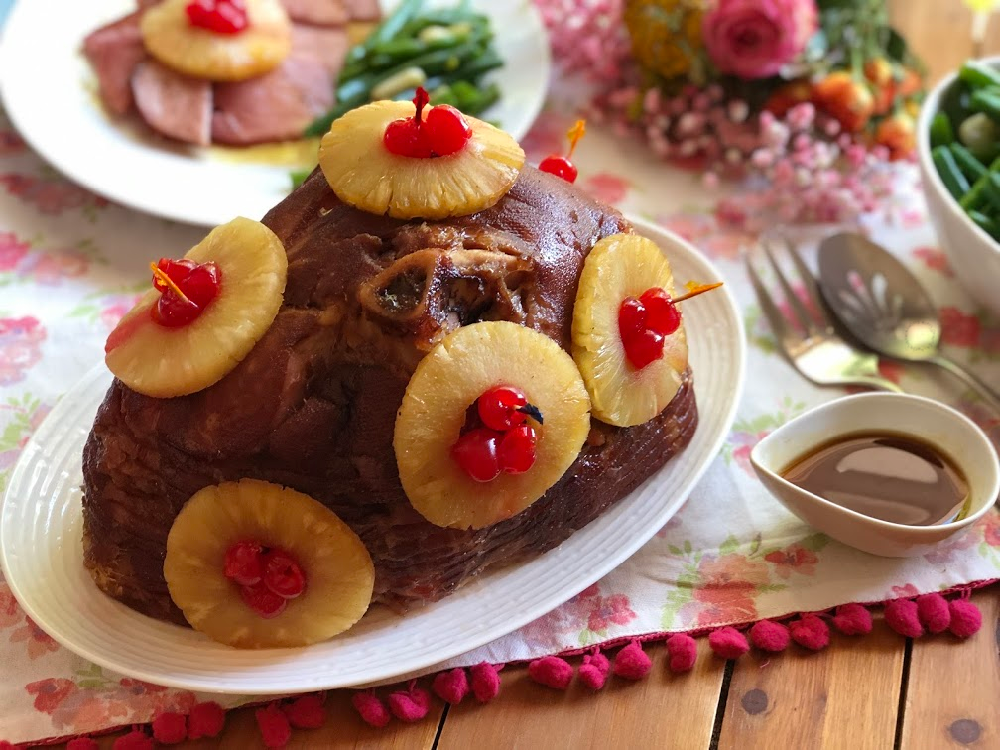 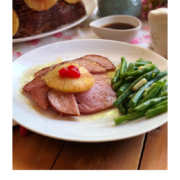 This Virginia Ham is the Easiest Recipe Ever!

Sometimes we get overwhelmed with the holidays and special celebrations because we have to prepare all this food and feed a crowd. The Virginia ham is the best dish to serve as it is simple and super quick to make.

My mom was used to make this dish not only for Easter but as part of the weekly menu. In Mexico, you can ask at the deli for individual thick slices of smoked ham. The cost is inexpensive and makes it a fun meal for the kids since it is sweet and savory.

Inspired by mom’s recipe for jamón Virginia, I made the honey glazed ham using canned pineapple, maraschino cherries, and a spiral ham shank I found on sale at the supermarket.

The secret is out!

Making ham for Easter is easy. You need a spiral ham, honey, brown sugar, pineapple and orange juice, cinnamon, and cloves. The meat is already cooked but needs warming inside the oven before glazing.

The secret to a perfect glazed ham is to add a cup of water to the bottom of the pan to keep the pork shank moist. And cover with aluminum foil while inside the oven.

Why do we eat ham on Easter?

The answer is easy; ham is delicious and typically cured during winter time, making the spring the perfect timing to enjoy freshly made pork ham. Additionally, a ham shank feeds a big crowd, and it is affordable. That is why glazed ham is part of the Easter menu here in the United States. In other cultures and countries, lamb is a classic dish served as part of the Easter or Passover menu, as it represents the Christian faith.

How to make the honey glaze?

You have the option of using the glaze that comes with the ham and make it your own. Or prepare my mom’s recipe from scratch. My mom’s homemade honey glaze has granulated honey, natural honey, brown sugar, pineapple and orange juice, cinnamon, and clove essence.

The trick for a good glaze is to let it reduce and thicken. This process requires patience but the result is amazing. Make sure to reserve some for serving family style. And allowing your guests to add more sweetness if desired. 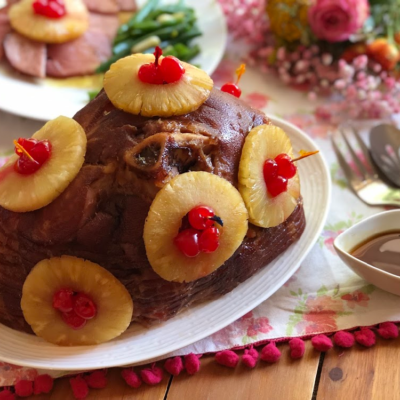 Virginia Ham with Pineapple and Cherries

I’m always on the hunt for new ham recipes so this is right up my street!

this sounds delicious! I love ham with pineapple and this recipe sounds so easy!

Thanks for sharing your mom’s recipe – we usually enjoy ham for Christmas – it sure does feed a large crowd – and I cannot wait to try this recipe out!

Love this, such an impressive meal!

Looks so delicious and perfect for hosting! Can’t wait to try this recipe!