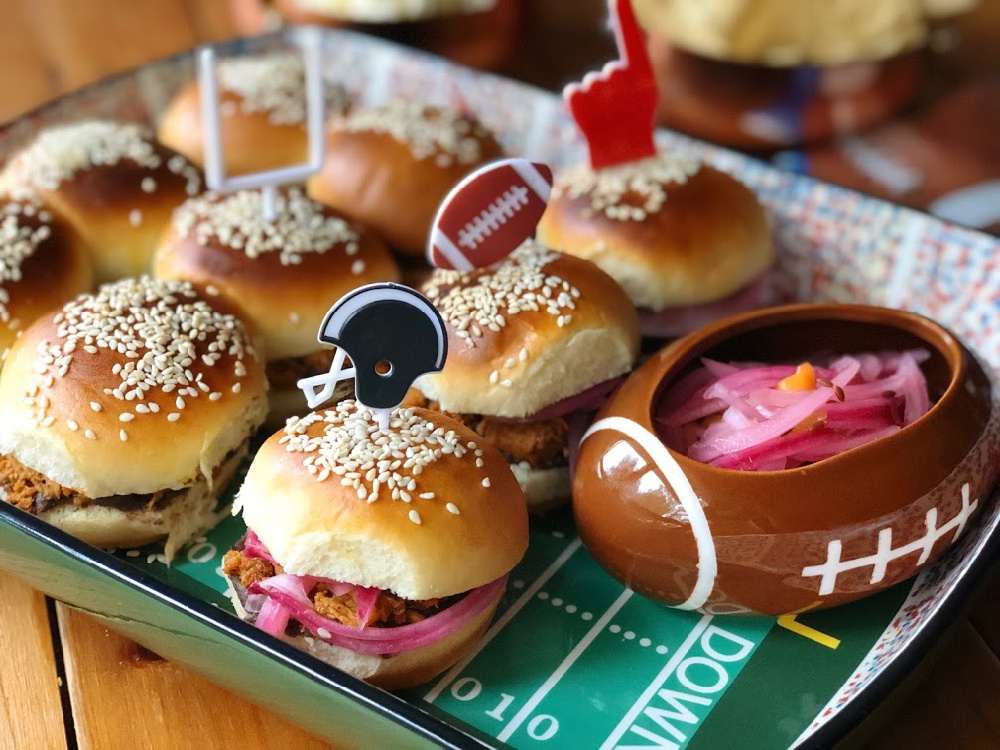 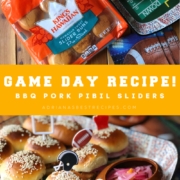 This recipe for the BBQ Pork Pibil Sliders was sponsored by King’s Hawaiian as part of an Influencer Activation for Influence Central and all opinions expressed in my post are my own.

We are so excited about the BIG game coming up this weekend to Miami. And having tasty bites is part of the fun too. The reason why our menu includes the yummiest BBQ pork pibil sliders with refried beans and habanero pickled onions.

We recommend King’s Hawaiian pre-sliced Slider Buns for an irresistible bite because you know, Buns matter!

Find King’s Hawaiian at deli or bakery aisles at the grocery store!

Tips on how to build the tastiest BBQ Pork Pibil Sliders.

First, you need the perfect slider bun. Visit your local grocery store and purchase the new King’s Hawaiian pre-sliced Slider Buns. These buns have an ideal size and shape for the BBQ pork sliders. Plus come already cut for easy handling.

Purchase one pound of pork shoulder and cut into chunks. If desired, choose pork loin for a leaner BBQ pork pibil option.

Prepare the marinade with sour orange juice (or standard orange juice), vinegar, cumin, oregano, garlic, and achiote paste. Mix well and cover the pork with it. Marinade for thirty minutes covered and inside the fridge.

Cook the BBQ pork in the pressure cooker or the Instant Pot for 30-40 minutes. When ready, shred the pork and set aside.

For more flavor, the pork sliders need pickled onions garnishing. Cut one purple onion making thin slices, and chop one habanero pepper. Place the sliced onions and the habanero in a mason jar. Add one cup of warm water and half a cup of white vinegar. Season with salt and cumin seeds. Mix and let the onions rest inside the fridge for an hour.

Are you ready to party?

Decorate your table with the colors of your favorite football team. Buy face paint, and start the BIG game celebrations with style.

We love to dress up the dogs and buy props for Instagram selfies. That way, everyone can create fun images to share on social media.

Football is such a fantastic game, no matter who the winner is, the excitement of the game is what counts, and of course, the half time show is always one that everyone expects too.

This year the show will be all about Latin rhythms, and we cannot wait to dance along. We live in Florida, so knowing that the BIG game will be nearby is also something that brings so much joy as Miami is the city hosting the tournament.

Having Mexican inspired bites is a must to go along with the Latin vibes. So we invite you to try our recipe for the BBQ Pork Pibil Sliders using the new King’s Hawaiian pre-sliced Slider Buns.

If you love King’s Hawaiian head over to their website and grab more recipe ideas!

Have you tried the BBQ Pork Pibil Sliders? Snap a photo and tag us on Instagram and or Facebook using the handle @adrianasbestrecipes and this hashtag #ABRecipes Happy Eats!

These are perfect for the big game tomorrow! Can’t wait to make them 🙂

I am ready for a party with these super sliders! They are the best option for a game day and for a BBQ party, too!

Love King’s Hawaiian rolls and I was planning to use them for super bowl sliders too! Yours look so much better than the ones I was going to make. May have to switch it up!

I love the pull apart look! Pulled pork is great for crowds, mix that with individual sliders and you have a clear winner!