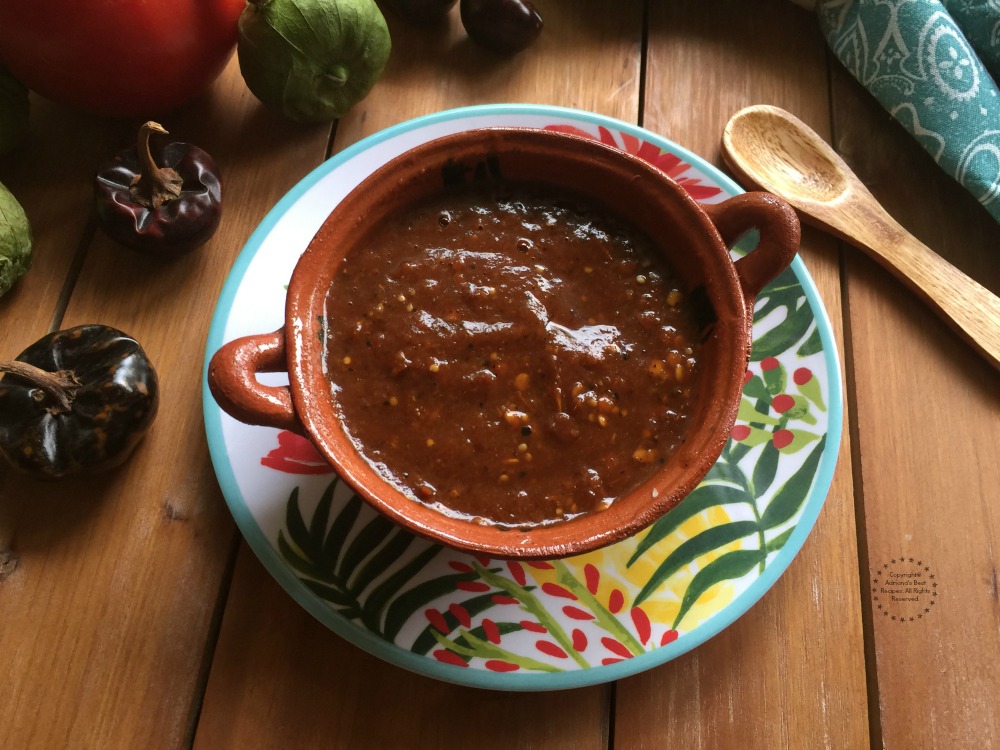 The cascabel taquera sauce never fails in my table. Mexican spicy sauces add a delicious flavor to every meal. Not only to tacos, but to rice, soups, stews, and it goes perfect with pork ribs and grilled meats.

This cascabel taquera sauce is made with dried cascabel chiles, tomatillos, tomato, garlic, cumin and salt to taste. It is very simple to prepare and I always offer it as an option when I organize barbecues at home.

The chile is called cascabel because when you move it sounds like a rattle. It is also known as chile bola and is grown in several states in Mexico such as Coahuila, Durango, Guerrero and Jalisco.

Many of my northern meals include this tasty sauce that can be used for stews such as pork and chicken in cascabel chile sauce. 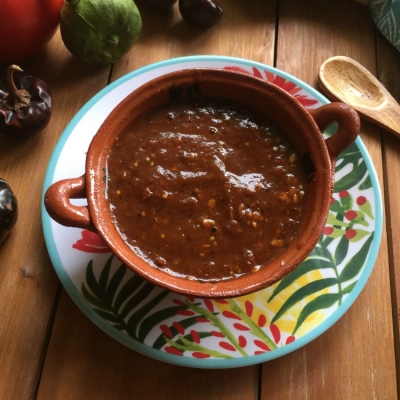 Use this sauce for garnishing tacos, soups, rice, casseroles, grilled meats, stews and much more.
Tried this recipe?Mention @adrianasbestrecipes or tag #abrecipes on Instagram

The cascabel taquera sauce has a very tasty flavor and is not very spicy. Has a characteristic smokey taste which is achieved by grilling the ingredients in the comal. Aside from the fact that the cascabel chiles are sun-dried. This process adds a delicious rustic flavor.

Using dried chilies in sauces is a good idea. Usually these peppers are not spicy but they have a lot of flavor. If you enjoy cooking Mexican food learning how to prepare authentic sauces is important. As these are the perfect match for Mexican tacos and antojitos so typical of our regional food offerings.

Dried chilies such as these cascabel chiles can be found in supermarkets and Hispanic stores in the United States. You can also buy them online. There are many kinds of dry chiles that are used in Mexican cuisine. Some include guajillo, chipotle, pasilla, chile pasado, morita, chile ancho, pequin, and chile de árbol. When you learn to use these dry peppers you can prepare sauces like mole, adobo, pipián and almendrado to mention a few applications.

Now that you know everything about Mexican peppers you are ready to prepare this cascabel taquera sauce with for your next barbecue or Taco Tuesday.

We happen to LOVE Mexican food. This sauce sounds amazing. I would use it on so many things. Homemade sauces are BEST….you can tweak it to suit your preference. More of one spice, less of another. I have printed this for later.

I can just imagine how delicious this sauce would be over some tacos. Lots of heat too! Yum!

I like the fact that this sauce has a smokey taste, I really like that in a salsa. I sense a Taco Tuesday with chicken and Cascabel Taquera Sauce in my future!

Sounds delicious! I have never used cascabel peppers before but I’m going to look for them now!

This sauce looks like it has such great flavors. I love Mexican cuisine and I enjoy how flavorful it is.