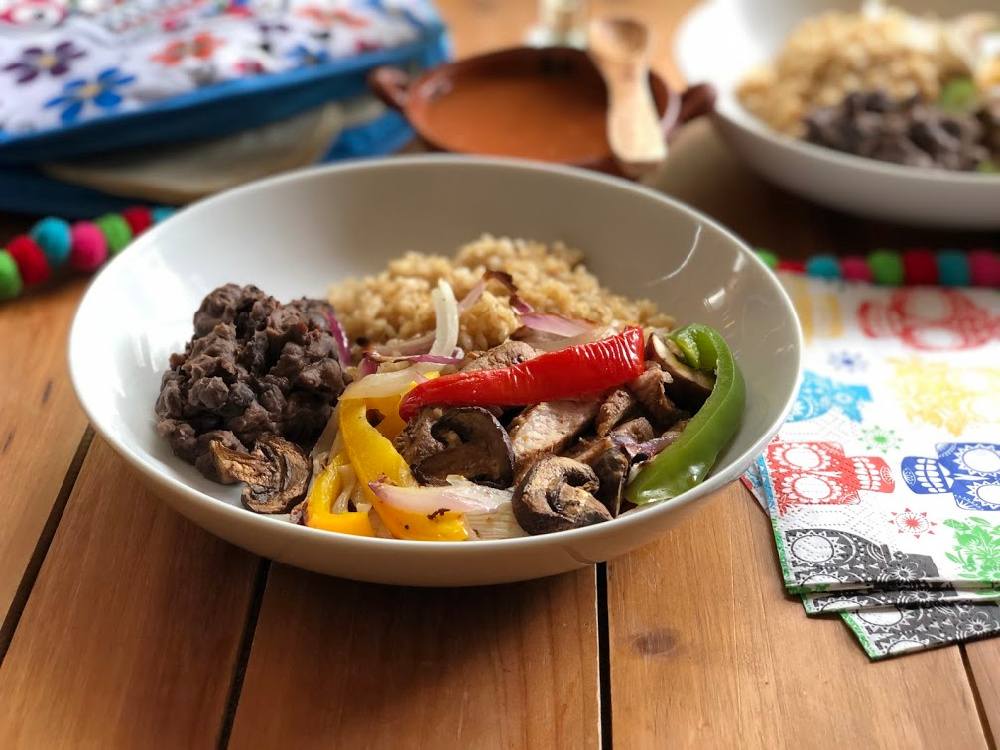 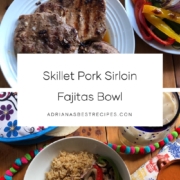 Our Cinco de Mayo menu includes a skillet pork sirloin fajitas bowl and pork fajitas quesadillas for those that prefer the handhelds.

The skillet pork sirloin fajitas recipe is a sponsored collaboration with the National Pork Board.

Pork is a delicious protein that is available in different cuts making it a versatile option when deciding the weekly menu for the family. And this skillet pork sirloin fajitas bowl it is a complete meal that allows for leftovers to make pork fajitas quesadillas that everyone loves.

What is pork sirloin?

We love this pork cut because it has the perfect balance of flavor and juiciness. This pork cut is versatile as you can make skillet pork sirloin fajitas, cook on the grill, roast, pressure cook, and even use the slow cooker to create a wonderful meal.

The trick to achieving a tender pork sirloin is to marinate the meat for a minimum of two hours or leave it overnight. The marinade I use is “Salsa Negra” or black sauce. I use black seasoning sauce, black habanero sauce, cumin, thyme, marjoram, fresh garlic, and lime juice. The flavor of this marinade is the bomb!

The skillet pork sirloin fajitas are super easy to make and you can adapt based on your family tastebuds. You can fix tacos, a pork bowl, and even pork sirloin quesadillas.

Using fresh seasonal produce is a good idea too. We chose colorful sweet peppers, jalapeño slices, purple and brown onions, and mushrooms. These elements add flavor and texture to the skillet pork fajitas too.

The “fajitas” trend started many years ago in Monterrey, Nuevo Leon where became street food for those attending sports events and the car races. The vendors would choose a tough cut of meat and tenderize by thinly slicing it like a rolling belt and grilling in a stick. Typically served with tortillas and hot salsa.

Then the “fajitas” started to appear in other cities, and Texans adopted them and now are a quintessential Tex-Mex favorite. The fajitas in Texas include colorful peppers and onions. Some serve the platter with flour tortillas, beans, rice, and guacamole. The dish has several variations with seafood, beef, chicken, or pork.

Our favorite is the skillet pork sirloin fajitas since this pork cut is a sensible option, easy to prepare, and it is on the list of the Heart-Check Certified products by the American Heart Association.

Are you ready to celebrate Cinco de Mayo?

We suggest making both the pork bowl with a side of brown rice and black beans. And the pork sirloin fajitas with toasty flour tortillas and cheese.

See below the step by step recipe details. This dish is freezer friendly and can transform into two or three different meals.

These days it is convenient to cook once and eat twice! 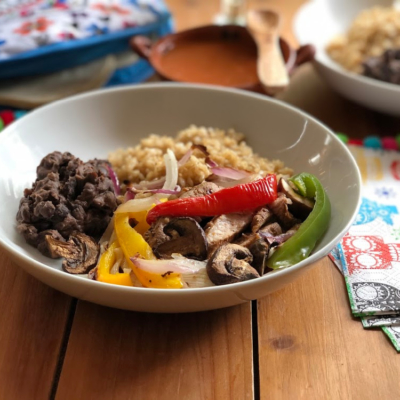 For the black sauce

For the Pork Sirloin Fajitas

These look amazing. My family loves this kind of food. I can’t wait to try this recipe.

Yum! We have been thinking of having a Mexican night which this dish would be absolutely perfect for sharing with the family, thanks!

I love everything that has mushrooms and avocado! Will definitely try this one 🙂

Wow! All looks so delicious and enticing. I loved this fajitas recipe, from the preparation to the cooking time then the finished product. I will definitely try this at home.

This is an awesome dish. I am impressed by how versatile is this pork protein as you can prepare many options to adapt based on our taste.