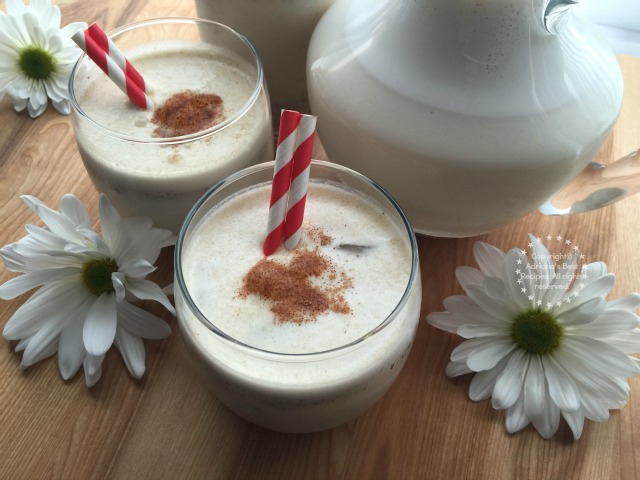 This is part of a sponsored collaboration with MilkPEP and DiMe Media. However, all opinions expressed are my own. #HerenciaLeche

Because we love milk and we want to inspire you to add more protein to your diet I am offering today a recipe for a Milk Horchata with Oatmeal. A delicious drink that you can have for a refreshment but also during your mealtime.

For this milk horchata recipe I am using oatmeal which is perfect for pairing with milk adding important nutrients for a satisfying drink. I am also using a small portion of sugar on the raw for sweetness. However you can use stevia as a natural sweetener to make this horchata sugar free depending on your taste and dietary needs. 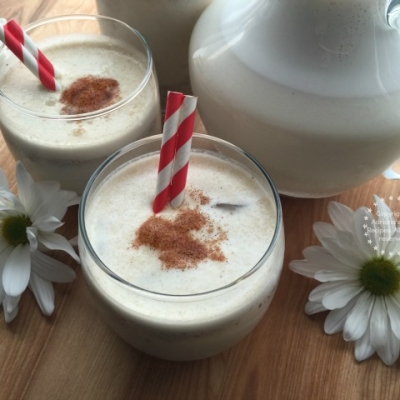 Chef Adriana Martin
Because we love milk and we want to inspire you to add more protein to your diet I am offering today a recipe for a Milk Horchata with Oatmeal. A delicious drink that you can have for a refreshment but also during your mealtime.
5 from 4 votes
Print Recipe
Prep Time 10 mins
Cook Time 5 mins
Total Time 15 mins
Course Beverages, Agua Fresca
Cuisine Mexican Cuisine
Servings 8 glasses
Calories

For this milk horchata recipe I am using oatmeal which is perfect for pairing with milk adding important nutrients for a satisfying drink. I am also using a small portion of sugar on the raw for sweetness. However you can use stevia as a natural sweetener to make this horchata sugar free depending on your taste and dietary needs. Do not use instant oatmeal for this recipe. Recommend to use are traditional old fashioned oats for better results.
Tried this recipe?Mention @adrianasbestrecipes or tag #abrecipes on Instagram

Horchata is a favorite beverage from my childhood in Mexico where typically this agua fresca is made with rice and cinnamon but in my version I am adding milk to provide extra creaminess and oatmeal instead of white rice for a higher nutritional content. The horchata beverage is part of the inheritance of our Spaniard predecessors and can be made in many different ways, using rice, almonds, sesame seeds, melon seeds, barley, chufas or tiger nuts.

Each country that has important Spaniard heritage has their own version of horchata, the only commonality is the love of whom prepares this refreshing agua fresca that originated in Valencia, Spain.

The name of horchata comes from the Valencian Orxata. Many say the name also comes from the latin word ordiata since originally horchata was made with barley and barley in latin is “ordi”.

This recipe for Milk Horchata with Oatmeal it is also inspired in the popular “agua or refresco de avena” that is very common in Panama City, a beloved place where I first tried this beverage that I made my own and it is reminiscent of the horchata drink my mom was used to prepare for us when young.

From muscles to hair, bones to teeth, the body needs protein to be strong and healthy. Protein at breakfast can help stay fuller longer so you’re more likely to stick to your healthy eating routine. It is worrisome that kids are falling short on important nutrients including calcium, vitamin D and potassium — all key nutrients found in milk. From the American Academy of Pediatrics, to the Academy of Nutrition and Dietetics, experts recommend including milk in kids’ diets. That’s because decades of research, and hundreds of scientific studies support the benefits of milk and milk’s nutrients – especially for growing kids.

Now I understand why my mom always sought giving us milk when growing up. And doing it via agua fresca like this low sugar milk horchata with oatmeal it is a smart way to introduce children to our latino flavors but also offering them a drink that is nutritional and with enough protein to help their growth.

I invite you to join MilkPEP ‘Somos Fuertes’ Herencia Leche  to celebrate Hispanic Heritage Month by adapting your favorite Latino dishes to include milk protein. You can also join the #HerenciaLeche Photo Challenge from October 5th through October 11th for a chance to win awesome prizes. Share your favorite ways to include milk in your dishes and follow the daily themes listed above for a chance to win prizes including Milk Money for a year! See official sweepstakes rules at www.dimemedia.net

Get inspired to cook with milk with Celebrity Chef/Owner,Giorgio Rapicavoli who is recreating his favorite recipes to include milk. See the video below to learn more.

My goodness this looks absolutely delicious. Adding the oatmeal is a good alternative & healthy idea. A yummy recipe that my husband would love so much.

This looks delicious. I could actually use something like this right now. I’m on a soft foods diet for a few days due to dental work.

OMG!! This one is looks yummy!! I wanna grab it from my screen lol.

I love, love, LOVE horchata!!! I’ve only had the rice-based kind, however. The oatmeal sounds like a nice alternative. I will have to give this a try!