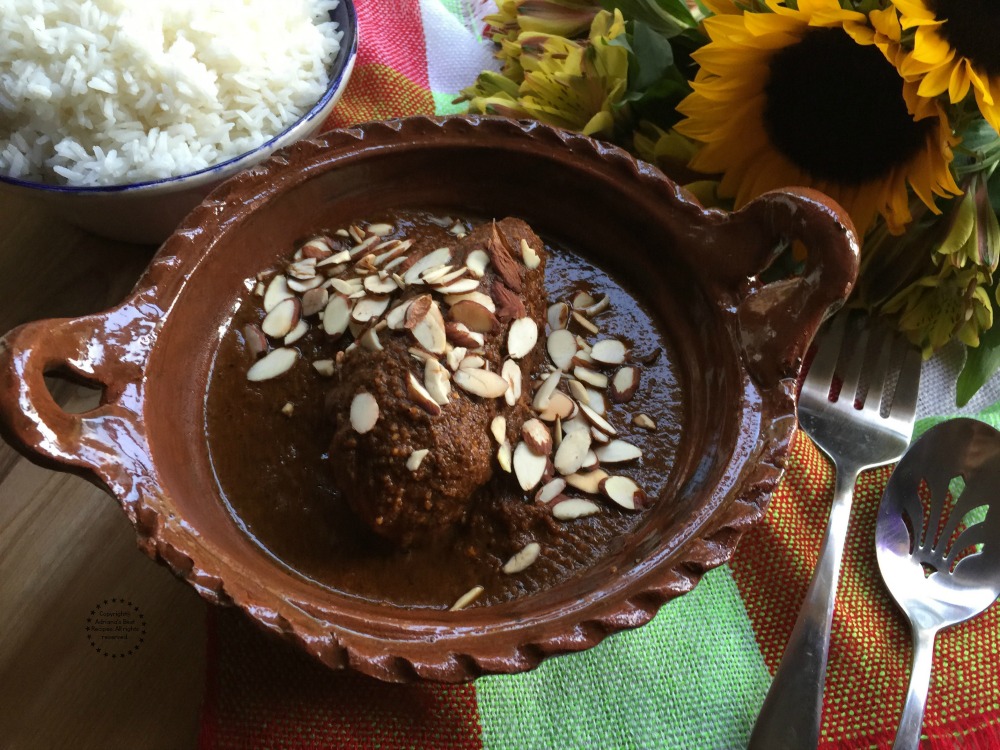 This recipe for the Almond Mole is brought to you by California Almonds.

Almonds have been always a favorite nut and an ingredient that my family has used for special savory dishes not only desserts. Inspired in my Mexican heritage and Day of the Dead, I have created a delectable almond mole.

This mole has almonds as the main ingredient combined with  tomatoes on the vine, ancho and guajillo peppers, roasted garlic, raisins, cumin, cinnamon, and chicken bouillon. In order to achieve a velvety consistency I have blanched the almonds and roasted them to enhance the flavor. This mole is not sweet, yet it is creamy, with the right amount of heat and very flavorful.

In the traditional Mexican cuisine there are many dishes that include almonds as one of the ingredients. There is one that is very famous called “almendrado”. Made with pasilla peppers and other condiments. I used this idea of the almendrado to create my own twist for an almond mole. 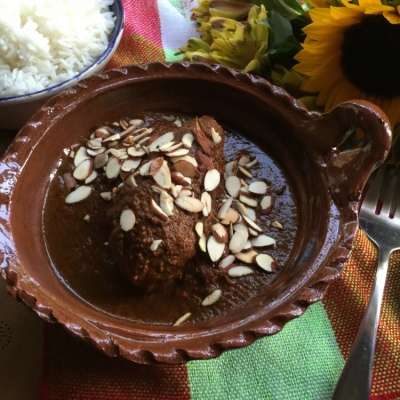 Almond Mole for the Holidays

Almonds have been a valuable ingredient in my family’s pantry for many years. And somewhat this ingredient was considered a luxury in Mexico. In the past, almonds were expensive because they were imported mainly from Spain.

Those almonds that I was used to enjoy with my grandmother were called marcona almonds. And this were only used for very special occasions and celebrations. Now, the situation has changed as almonds are more affordable and other varieties are available that are less expensive. That is why almonds have become a snack of choice for those seeking a healthier diet not only in Mexico but also here in the United States.

The almond mole that I am suggesting to include in your upcoming Day of the Dead dinner feast, is a simple recipe. But requires patience and to follow the recipe steps. As any good dish, not rushing the cooking process will assure a successful outcome. This almond mole I am serving over a poached chicken breast that melts in your mouth and a side of white rice. Both, the chicken and the rice complement very nicely the almond mole sauce.

Did you know that almonds originally were brought to America by Franciscan missionaries that came from Spain to settle in California. Spanish cuisine includes almonds in many of their traditional dishes, sauces and sweets. Some of my favorites are the Catalonian romesco sauce,  horchata, mazapanes and turrones. So it is understandable that these missionaries, among their religion they also brought almond trees to plant their beloved Spanish almonds in American soil. I am so glad these missionaries brought almonds to America and that now they are grown in California. Few weeks ago I had to chance to attend an almond harvest with experts from California Almonds. I will share in another article my experience and all the things I  learned about almonds; how they are grown and how they have become a favorite in the US for a healthy snack.

In fact, last September 30th FDA has officially declared almonds as a healthy. As they contain predominantly “good” monounsaturated fats and 14 percent of the Daily Value for fiber plus other attributes that are good for us.

Hi- I am making this for a big dinner party on Saturday evening and just noticed a discrepancy. Your directions mention tomatoes and the pictures include tomatoes, but the list of ingredients omits them. Are they in or out? And if they’re in, how many? I need an answer quick! Thanks !

Your pictures always capture your food so beautifully. This looks great!

I remember trying some, years ago, at a café in Los Feliz in LA. It was delicious. I’d love to try your recipe. 🙂

This looks so tasty! And those blanched roasted almonds are just beautiful.

I love anything with almonds in it! I will definitely have to give this recipe a try!