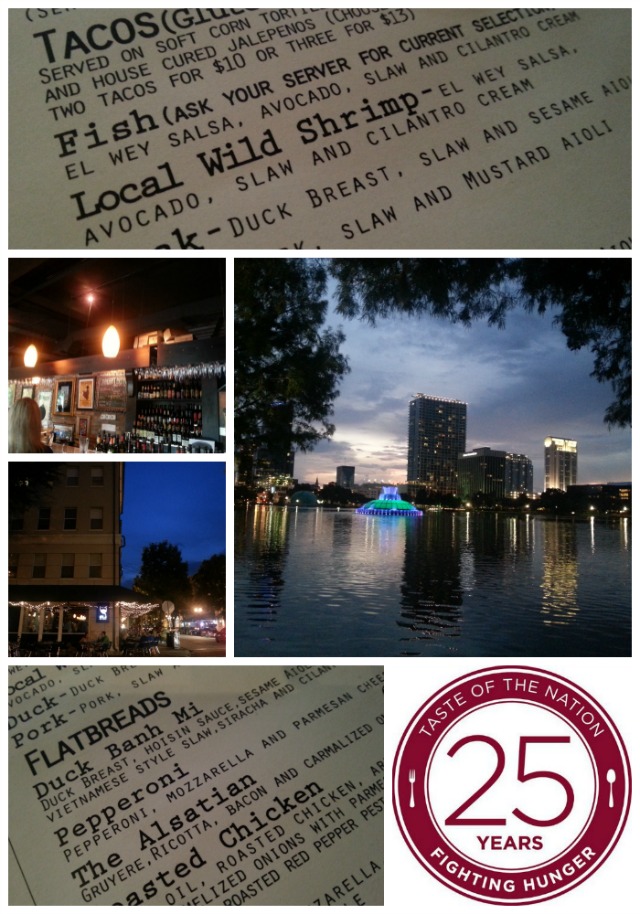 This month is all about Wine Wednesdays at Eola Wine Co to support Share Our Strength’s Taste of the Nation® Orlando and our local organizations Coalition for the Homeless of Central Florida and Second Harvest Food Bank of Central Florida. You can signup for the upcoming events on July 23 and 30 and August 6. The weekly wine event is being hosted by Eola Wine Company for the second consecutive year to generate awareness for this year’s Taste of the Nation Orlando and raise money toward Share Our Strength’s $300,000 fundraising goal.

Eola Wine Co is a cozy laid back bar located at 430 East Central Blvd. in Thornton Park, Orlando, few steps from my favorite location in Downtown Orlando Lake Eola Park. Perfect for happy hour, girls night out, romantic night or hanging out with other couples and friends. There is a convenient garage at the corner of the street (only $3.oo dollars for 2 hours) so makes it easy to relax and not worry where to leave your car. They serve wines and craft beers and also have a great gourmet menu with appetizers and full meals that go from the traditional cheese plate with nuts, cold cuts and grapes to interesting bites like duck tacos and flatbreads. A must try!

The Wine Wednesdays benefiting Share Our Strength’s Taste of the Nation® Orlando only costs $15.oo dollars per person and it is all you can drink white or red wine. Last Wednesday’s selections included a McLaren Vale Shiraz and a crisp Ca’Donini Collection Pinot Grigio both mild and perfect pairings for any of the menu options offered at an additional charge at Lake Eola Wine Co.

This year is  25th anniversary for  Share Our Strength’s Taste of the Nation® Orlando. The event is on August 9 at the Orlando World Center Marriott and celebrates Orlando’s culinary excellence and Taste of the Nation’s legacy of combating childhood hunger. The event will showcase thirty of Central Florida’s leading chefs and restaurants and will feature two James Beard Foundation Award semi-finalists – Hari Pulapaka of Cress Restaurant and Kevin Fonzo of K Restaurant and Wine Bar.

You can join us helping us raise funds by participating the the Wine Wednesdays at Lake Eola Wine Co or by purchasing your Taste of the Nation event tickets HERE.

Join us this Wednesday, raise the cup against child hunger!

Great pics, great cause. Hope you meet your goal. BB2U

Adriana you and your husband make a cute couple, congratulation, nice event with a very important cause. Thank you for sharing!